Hedgerows are your friend

Today's weather forecast: 50mph winds, dry until 12pm.  So, the plan was to be out on the bike at 8:30am with a scenic route up to Grafham Water, cross the A1 and then wind my way back via Biggleswade to do a 70 miler, with a chance of getting wet by the end.

Why Biggleswade? I spent a bit of time researching the Ivel bicycle works that were based there in the 1880's and, although the factory has been long gone, I was hopeful of finding some place marker or the Ongley Arms where the founder, Dan Albone, set up his business. 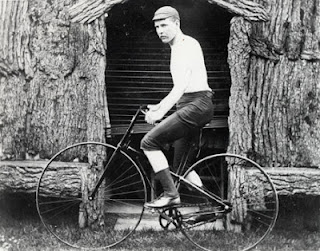 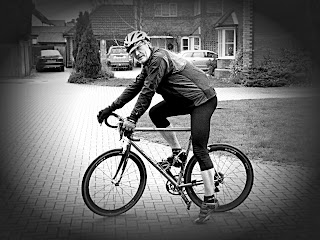 Me! Photographed and edited by my daughter after I returned from yesterday's pedal

True to forecast the weather was windy and I realised that it was going to be hard work on the return leg.  Riding my titanium bike with deep section wheels would not be wise so I chose my full carbon Wilier with C24 wheels.

The ride out with a strong tail wind was fast. I stopped to take a photograph of the magnificent hangers at Cardington, but I had to hold the bicycle as it kept getting blown over leaning against a post. 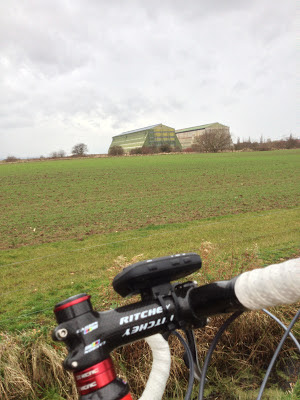 Cardington airship hangers - might be recognisable to those who have seen the opening scene in the latest Batman film, The Dark Knight Rises ﻿

The lanes to Grafham Water are some of the best cycling roads in the area, with very little traffic and only a few junctions to traverse.  I reached the huge lake with an average speed approaching my personal best courtesy of the tail wind but that was all to change as soon as my route passed through Buckden and I turned into the wind.

I have never ridden for so long on the drops of my handlebars but it was necessary to make any headway into the relentless wind.  I crouched as low as I could, my chin almost resting on the bars with my head strained back just to see more than ten feet ahead.  My average speed dropped dramatically.

Then it started to rain, just a shower to start with and then harder, much harder.  The rain stung as it hit my face and it was a relief when the road turned and the hedgerows offered some shelter from the wind.

I'm saddened to report I didn't spot a blue sign or equivalent for Dan Albone in Biggleswade.  There are cycle shaped road furniture but I didn't spot the Ongley Arms or anything else acknowledging the cycle works.  I need to explore and investigate further.

Essential kit today? My wrap around prescription Oakleys protecting my eyes from the lashing rain, but even so the rain stung the side of my eyes when hit by a sidewind between the breaks in the hedgerow.