Another DNF on Thursday night :-(

The MK Bowl races are becoming very popular and a few people were disappointed at sign-on when they were told the maximum entrants of 80 had been reached.  Thankfully I had arrived early and secured a place with the 3rd and 4th Cat racers. My expectations were better than last week; I had been pushing myself on my commute and managed some good short, 1-hour specific training rides since the last race.

As per usual, the fast group (E,1 & 2) went off first and we were set off shortly after.  I recognised a few of the racers of the previous week, including a few girls.  I managed to get a good position in the bunch, coincidentally on the wheel of one of the young girls and watched our average speed increase over the course of the first 30 minutes back up to the 25.6mph like last week.

At 30 minutes the marshals called out that, at the next lap, the course would be extended to go out the main gate and around the top car park before re-entering the main Bowl circuit.  As we began the climb to to the top of the circuit the young girl in front of me managed to find the space to move to the outside of the bunch and I followed with a view to moving up a few places.  Instead of moving back into the bunch though, the girl attacked off the front and I felt compelled to keep on her wheel - Christ she was quick! Even going downhill I was stomping on the pedals to match her pace.

She eased up after the descent and we were caught by the bunch, but my legs had gone to jelly. Whereas she jumped back into the bunch, I got shelled out the back and dug deep just to tag onto the wheel of the last racer.  Then we went out the gate, through the corners and out onto the uphill with a headwind. I was struggling to hang on and beating myself up for covering the attack earlier.

Some other racers got dropped and eventually me too. I got lapped by the fast racers and jumped on the wheel of some of their stragglers.  There was no way I was going to get back on to my bunch, so I got on the drops and solo'd around the circuit for a further twenty minutes until I heard the Commissaire say he was about to call for the 5 laps.  There was no point me time trialing around for a further 5 laps so I retired (again).

Lesson learned: there are a lot of fast 3rd Cat racers, including young women and I shouldn't feel it necessary to do a stint on the front and chase down any attacks.

I need to find some 4th Cat races to regain the confidence in finishing a race.

The benefits of a lifetime warranty

I had noticed some noises emanating from my Van Nicholas bottom bracket generally heard when I honked up hills, so I decided to replace the bottom bracket.  The current one is a Dura Ace 7900 and I fitted it last August in an effort to resolve an occasional clicking which turned out to be from the pedal.

Given that I have got only about 3,000 miles from the Dura Ace part I decided to try a Chris King bottom bracket instead.  The Chris King part is serviceable and I'd read that they last over 5 years without needing replacement bearings so I went ahead and bought one from ProBikeKit after they offered me a further 15% discount on top of an already competitive price.

Ahead of tomorrow's planned pedal with The Hub, I removed the chainset and old bottom bracket and gave the titanium frame a wipe down with a baby wipe, then discovered it - a crack in the frame just above the weld! 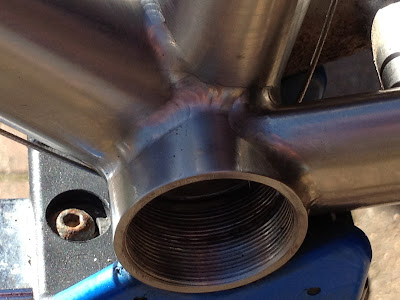 The frame is 6 six years old but it has a lifetime warranty. I telephoned Fatbirds in Hunstanton, where I bought the bike new and they said it would be sent to Van Nicholas who would then assess it and replace it if they felt it was a fault, or offer me a half-price replacement if they thought it was as a result of a crash.
I need to strip the bicycle down to give them the frame and find the purchase receipt. I have also asked Fatbirds if they could offer me the loan of a demonstrator bike whilst I wait.
Watch this space.
﻿
Posted by BMc at 16:27 No comments:

This week I raced with Magnus Backstedt,  the winner of the 2004 Paris-Roubaix!

The MK Bowl race had mixed categories with Elite, 1st and 2nd starting before the 3rd and 4th Cats, so I gave Magnus a headstart and raced with the slower group.
After 30 minutes of racing around the inner bowl circuit the marshals opened the side gates for the remaining 30 minutes and 5 laps to include the extended closed road section complete with fast corners.  At this point in the race Magnus lapped me, despite a 25.6mph average speed.
With the faster riders going passed, I eased up a fraction but as a result I lost ground on my bunch and dropped out the back. I knew my race was over so I retired and became a spectator.
Lessons learned:
Until next week...﻿
Posted by BMc at 10:09 No comments: 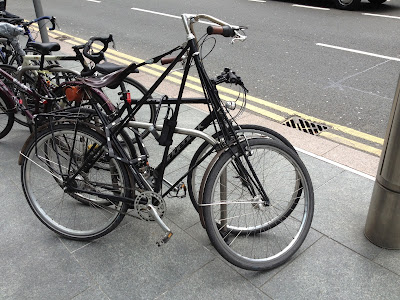 I knew instantly what it was because I was recently given a fabulous book called Cyclorama, which features the Pedersen bicycle.

My family pointed out that it looked as though I was sitting more upright than the other racers I was competing against, so I have lowered my handlebar. I have moved the spacers to above the bar temporarily whilst I decide whether to cut the steerer. 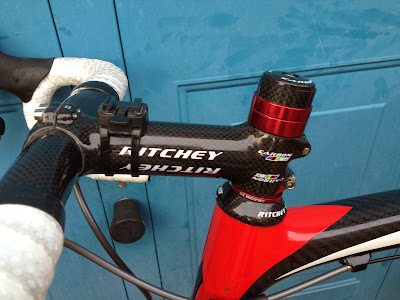 The stem is not quite 'slammed' but the handlebar now sits about 2cm lower than previous.  Given that I am planning on racing in closed circuit events for the next few weeks, hopefully my back will tolerate the position for the hour-plus.

I began commuting on my Brompton in August 2010. My office was relocated to Canary Wharf and I realised the cycle ride would eventually save me money whilst improving my fitness.  I had ridden the Marmotte earlier that summer and just returned from a cycling holiday around Aix-en-Provence (climbing Mont St. Victoire every day) so I was able to have some fun in the SCR on my nice new Brompton.

On one of the early pedals I remember riding through the King Edward VII park and being considerate I picked up the bike to carry up some steps to avoid a group of joggers coming the opposite way. At that point the Brompton lost it's nice new feel... When I arrived at work and folded the bike to put it into my bag I noticed that the plastic chainguard had snapped and one half of it was gone. A quick search on-line and I found that a cheap replacement was available but I decided to see if I could find the broken piece.﻿

On my way home I returned via the park but couldn't find the broken piece, however I extended my search area a little wider the following morning and found it.  It pressed back into place and I made a mental note to apply a bit of superglue to the two broken joints.

Nearly three years later, and whilst giving the Brompton a clean ahead of the trip to the Brooks factory, I was dismayed to see that I'd lost the half of the chainguard again (or maybe the other half?). I hadn't ridden the Brompton since the 27th March and I had no recollection of where or when I'd lost the piece. A quick check on the internet and I added a replacement to my wishlist.

Back to work after over a week off and, what with the clocks going forward, I was struggling to get back into the routine of getting up at silly o'clock and ended up catching a later running train departing from platform 1. The following week, on Monday I had managed to get back into the earlies routine and I walked down platform 3 to my normal waiting and embarking point to discover the broken half of my chainguard.  It must have been sat there for at least twelve days!

Reunited with the wayward piece; I picked it up, re-fitted it and made a mental note to give it a clean with a baby wipe and add a couple of spots of superglue.

Further mental note - remember to housekeep my wishlist ;-)
Posted by BMc at 20:33 No comments:

My son and I were privileged to be invited to a tour of the Brooks factory... 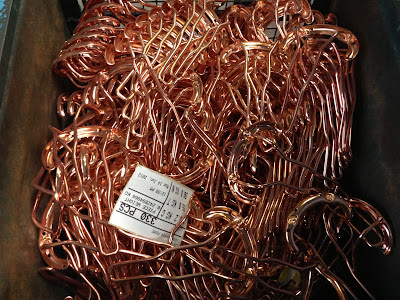 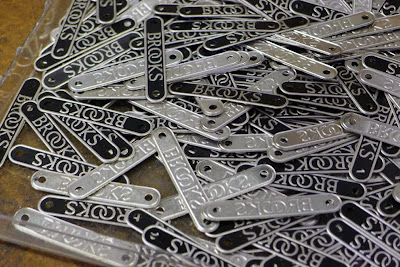 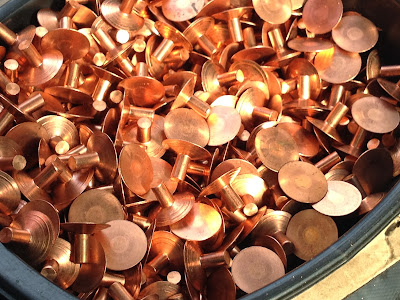 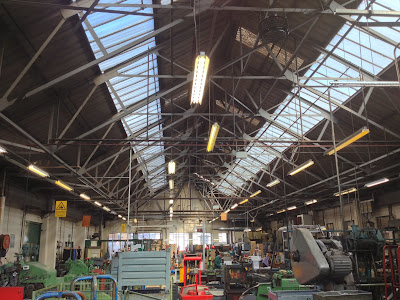 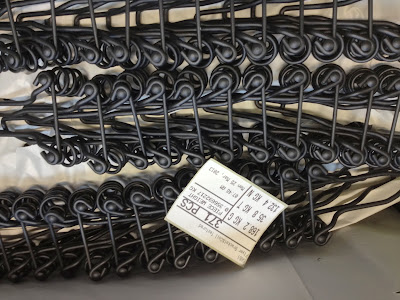 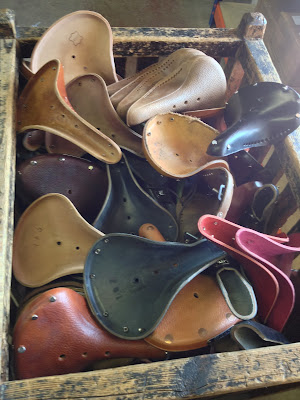 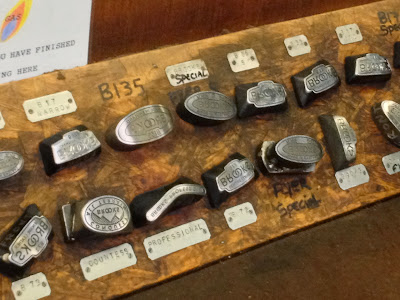 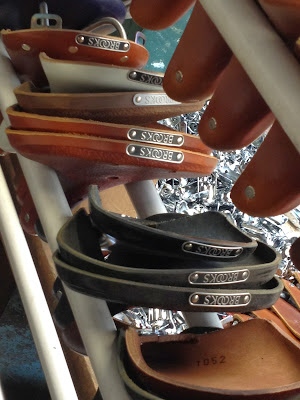 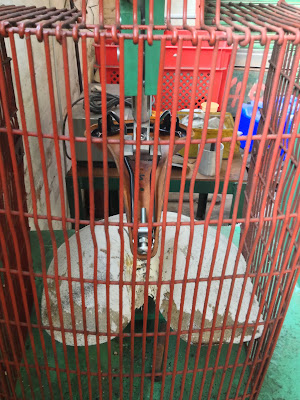 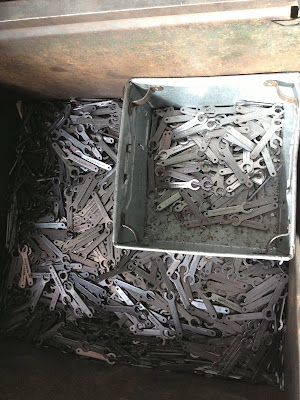 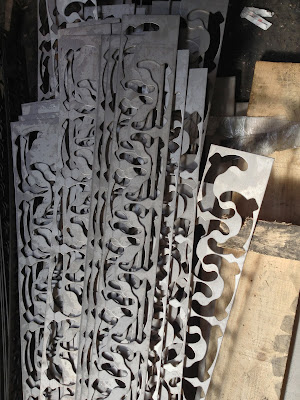 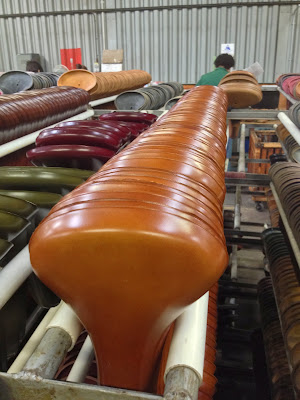 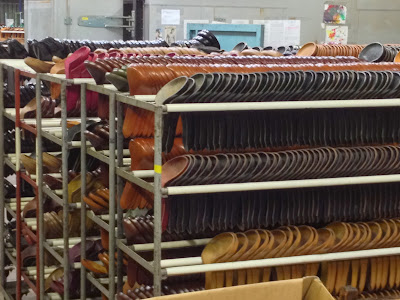 I had a nervous moment at one of the recent MK Bowl races. In fact I had many, but one of the them involved taking to the outside of the track, whereupon I discovered a lack of grip and made a mental note not to verge too wide on subsequent laps.

I also added a new pair of tyres to my wish list which was granted by my parents on my recent birthday and I received a pair of Vittoria Open Corsa Evo Tech tyres.  I fitted them for the next MK Bowl race, inflated them to 120psi and had no issues with grip. 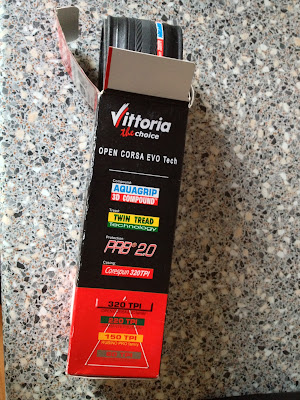 However, I used my race bike for my 100km recovery ride and when I gave it a post-ride clean I noticed that the tyre was deflated due to an embedded flint. I must have been feeling tired as, rather than replacing the inner tube I chose to patch it; a decision I later regretted...

Yesterday I entered the 4th Cat race at Hillingdon, rode around the 0.9mile circuit a couple of times to warm up and then joined the start line. As I listened to the Commissaire briefing another racer pointed out that I had a flat tyre. My race was over prematurely.

In fact it wasn't over. I was lent a spare wheel by a very kind young gentleman who was carrying spares for his girlfriend also participating in the race (Cat 4,3,2,1 women were racing 1 minute behind the Cat 4 men). I slotted the rear wheel in quickly and re-joined the bunch waiting to start.

Sadly I didn't score any points in the race however I dodged the (several) crashes, stayed upright, did my share on the front, covered a few attacks and finally finished within the top 20.

I am enjoying racing with the 4th Cats but would like to score a few points.  The 24mph average speed is within my capabilities but I need to do some training and fettle my race bike to make it a bit more race-ready in advance of my next planned race in a couple of weeks.