A big pat on the back for me. I completed the metric century challenge this year! 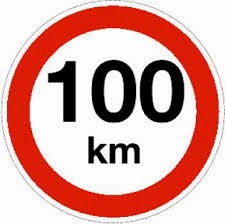 You must ride one metric century (100 km, 62.18 miles) in every month to successfully complete the full challenge.  Only single continuous rides of at least 100km qualify, not a daily or weekly total of several shorter rides that exceed 100km. Tea stops are allowed, nay encouraged.

I rode over 20 metric centuries throughout this year, with the Prudential Ride 100 counting as two because I rode from my hotel in Gants Hill to the start, did the 102 miles to the finish and then cycled back to Gants Hill to collect my car.

The tragic deaths of cyclists in London is topical news and worrying since I'm also a London cycle commuter.  My journeys are now whilst it is dark or (worse?) with the sun low in the sky and quite blinding.  To mitigate the risks of becoming one of the statistics, I have re-considered my routes.

Whenever possible I used to cycle (considerately) along the Thames Path but signs have been erected to say that cycling is prohibited and the once bridle towpath has been renamed the Thames Walkway. The 'no cycling' signs do appear to be rather amateur, the sort you can buy from B&Q and I'm not aware of any local bylaws imposing the ban on cycling, however there is the possibility of a £50 on the spot fine if they are genuine.

My favourite route is to traverse the bridge at St Katherine's Dock and cycle over the cobbled roads through Wapping. It is not always easy to get into the right hand lane at the traffic lights on Tower Hill and the ASL is always full of mopeds and motorcycles.  Once across, the right hand filter lane for the Tower Bridge has traffic lights which don't work until there is at least a couple of taxis waiting in line to trigger the sensor.

I have tried The Highway route out to Canary Wharf and, in the morning with rush hour traffic, I have witnessed a few incidents. On one occasion a tipper truck swerved to overtake a cyclist ahead of me whilst another tipper truck was in the outside lane of the dual carriageway. The wing mirrors of the lorries collided clearly demonstrating that the carriageway is not wide enough for two lanes of traffic and cyclists.  The drain covers on the road are also treacherous as many of them have collapsed due to the weight of the trucks going over them. The authorities attempt to fix them overnight, sometimes temporarily by covering them roughly in tarmac but for cyclists it is an obstacle course. To cap it all, there is a cement works near the entrance to the Rotherhithe Tunnel and their trucks spill rocks and cement along the road, sometimes in mounds as big as mole hills.

The CS3 starts at the Tower Gateway, behind the Royal Mint, so approaching from Upper Thames Street a cyclist has to go around the Minories or dismount and take to the pavement to safely get to the start of the blue route.  Once on the CS3 it is superb; it is marked out well, has traffic lights across junctions and has white lines painted to indicate where to give way. The only issue is that it is narrow and cyclist coming from the opposite direction come quite close to you.

I have used the CS3 route twice this week and I think it is perfect for my tootle in to work. It is a different story for those in a hurry - cyclists overtaking others can be inconsiderate and the curses are frequently colourful and I witnessed an accident between a cyclist and a car on Wednesday morning. A mountain-biker overtook me safely but not paying sufficient attention to the road ahead given his speed. He collided with a car doing a strange manoeuvre, reversing out of one of the side roads. Thankfully no one was hurt but the incident was like watching a slow-motion train crash - predictable.

My wife asked me what advice I would offer to contribute to a radio phone in discussing cyclist's tips on travelling safely. I did the normal thing trying to think what aspects of experience, common sense and being well equipped I might offer to help reduce the risk of ending up in hospital with a nurse stripping you back to see the injuries, or, worse, the mortician.

I have given it further thought now. When I was a child my mum told me to always wear clean underwear in case I was involved in an accident and ended up in hospital as it would be a disgrace for a nurse or doctor to see you wearing anything but spotless Y-fronts. So, my tip to cycle commuters - ride assuming your pants are going to be an embarrassment.

When you receive compliments from pedestrians and motorcyclists you know you've chosen wisely.

I returned to work after a half term holiday and the return to GMT which now requires the use of lights on my commute.

My front lights...Hope Vision 1 and a Blackburn Voyager