The road to recovery

I had an entry to the Roman Challenge mountain bike event today but I wasn't feeling capable of doing the ride.  I'm still feeling under the weather after the Flu. I also had a logistical problem (no car) and the 50 miles round trip plus the 30 miles event distance would have killed me before having a chance to tick off more bucket list items.

Instead, I contacted a member of the local Flitwick Tri club via Cycling Buddy and asked if I could tag along on a local pedal. And what a beautiful day for a cycle - the temperature may only have got as high as 9 degrees but we had blue skies and a slight breeze.

We followed our front wheels in the direction of Old Warden.  I wore my chest strap so that I could monitor my heart rate, which I could tell was much higher than normal and I was still feeling a bit wheezy.  I was also having a mechanical issue with my Van Nicholas and the rear derailleur was skipping between a couple of the sprockets.  The problem with the Chinook is that it doesn't have a front cable adjuster and I couldn't be bothered to stop and tweek the rear barrel adjuster.

Our route took us through Old Warden, Northill, Cople, Cardington, Ireland and then to Langford cafe, earlier than the 10:30am opening time, so we went a little further to Broom to check on the progress of the Jordan's visitors centre which is due to open early 2013. We doubled back to Langford cafe for a coffee and some Rocky Road :-)

In the cafe we agreed a good return route would be via Henlow and up Pulloxhill.  I had the typical stiff legs after the short cafe stop but they began to loosen up on the gentle climb out of Henlow and I started to feel a bit less chesty.

As we approached Pulloxhill we were overtaken by a large peloton of mixed club riders who were on a Sportive. They had already ridden 50 miles, so about the same as us, but many of them were unaware of the climb around the next corner.  I couldn't resist attacking them on the hill so I made my way around them and hit the 14% climb out of the saddle. As I put a bike's length into the lead rider my chain slipped and the rear wheel jumped what felt like a foot into the air, but I quickly recovered, flicked it up a sprocket and continued my attack to win the sprint to the summit. Nice, but at a near maximum 171bpm heart rate and with a hole ripped into my Shutt 3/4 bibs where the bar end caught my thigh. 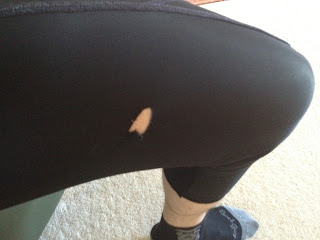 Back at home I put my bike on the workstand and gave the derailleur adjuster a 3/4 turn. Now perfect and I wish I had stopped early in the ride to do it.

That was an expensive scalp winning effort :-( 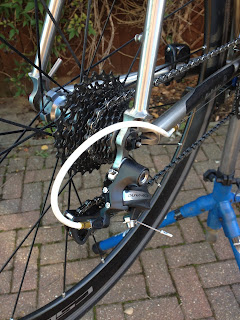 Thank you to Chris W. for letting me tag along today.  My turn to pay for coffee and cake on the next pedal.
Posted by BMc at 14:02