How did my BWC plans unfold?

I finished in under 25 minutes with an average speed of 19.7mph over the 8.24 miles and knocked 1:32 off my 2011 time.  However, in the overall results I finished 10 places further back than last year which would suggest that the standard of racers is hotting up.

What did I do differently this year? :

Very little changed in my training programme since last year and I raced on the same S2L (2-speed) Brompton.  I was fortunate to get a start number in the first pen which meant I had fewer (possibly slower) riders to overtake but it also gave me the chance to sit on the wheels of faster riders.

I had a double espresso from Look Mum No Hands before the race!

I realised from last year that I wasn't going to be able to continue pedalling on the descents because of my gearing so I put my knees together, tucked my elbows in and tried to keep my head as low as possible.  I noticed I was able to distance several other riders on both laps using this technique.

This year I wore a jacket fastened up, pinned down and tight enough to eliminate flapping.  Last year my jacket became a cape and clearly caused drag.

Whenever I could, I tried to keep my body position low.  I didn't go as far as to rest my forearms on the handlebars but, in a (not quite scientific) test on my road bike, I realised that at 20mph I could increase my speed by 2mph with the same effort just by holding the handlebar drops.

I admit to wheelsucking :-( I jumped onto the wheels of fast groups.

I had sufficent energy left to put in a sprint at the end.

What could I have done better? :

I didn't go off like a scalded cat but I had two occasions near the start when I had to feather the brakes and I may have lost a few seconds.

The big hill felt steeper this year and I'm convinced I stayed on the small sprocket last year for the entire first lap, whereas this year I changed to the low gear fairly early on and perhaps lost some time.  This was probably because I might weigh a few Kg more this year.

One rider went wide on the descent to the first cattle grid and ended up 100 feet into the field.  Weird though as she had good bike control and kept it upright in the long grass.

As I changed down for the hill on the first lap I was passed by Dr Hutch and, it was difficult to tell but it looked as though he was also riding a 2 speed and was grinding it out on the 54-12.  His race number indicated that he was in the 2nd pen, so I assume the organisers were trying to handicap him.  It didn't work and he knocked a minute off his personal best and lapped the course at over 24mph average. Good speed sir. 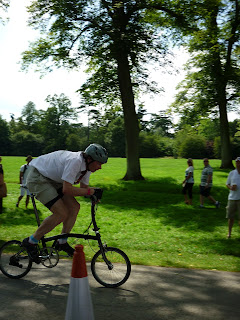 On the run in to the finish line I was riding in a strung out group and we passed some slower riders.  The second wheel in the group (on an orange Brompton) swerved to the right and got tangled with the rope and a supporting post sending him crashing. Everyone else managed to avoid having a pile up and he appeared to be okay.

I shall be back next year with some modifications to my bike and a target time of 23.5 mins. And maybe a final attempt in 2014 to get on the podium in the Vets category.
Posted by BMc at 19:56