Many years ago a friend's elderly neighbour admitted to a costly error...

His wife had told him that the washing machine was broken so he gave it a cursory look over, agreed it was kaput and then telephoned John Lewis to have them deliver a new one and take the old one away.  The nice men in their green overalls delivered the white goods the following day, installed it and took away the old one.

However his wife reported to him that the new one was also broken.  The pair of them scratched their heads, opened the door, counted to ten and closed the door, but it was still broken.  Then they realised that it wasn't switched on at the wall and for that matter perhaps the old machine wasn't either.  Their grandson had been to stay and they suddenly realised he had used the washing machine plug socket to recharge his new radio controlled car.

A call to John Lewis to try to get the old (but working) machine back proved fruitless as it had been taken to the nearby recycling centre. Oh well, lesson learned. 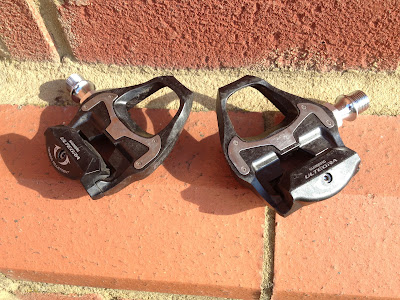 My Van Nicholas developed a clicking during the Ardechoise and I made a mental note to replace the bottom bracket before taking the bicycle on holiday.  So I bought and fitted a new Dura Ace 7900 bottom bracket during the pre-holiday bicycle clean and thought no more about it.

However, on my first ride in the Pyrenees the clicking was still there.  Oh well, at least I didn't throw the old bottom bracket away.

So if it wasn't the bottom bracket then it must be the Rotor chainrings. Perhaps one of the chainring bolts wasn't at 7Nm.  A quick check when I got back to the villa and...nope, they were all good.

So, when I returned home I was still scratching my head, gave the bike a clean and went for a pedal. Still there!

Only one thing left to check. I took the pedals off and tried the bike with a spare set and, bingo, the clicking has gone.  Weird though, as the pedal spindles appear fine, so maybe my cleats.

I wish it was as straightforward as checking the plug is switched on :-)﻿
Posted by BMc at 17:52