In 2008 I took my family to the cycling festival at Blenheim Palace and we laughed at the Brompton race.  That year was the first UK-based Brompton world championships and Roberto Heras, ex-super domestique to Lance Armstrong, came over from Spain to add to his palmares.  He was beaten by 3 seconds. 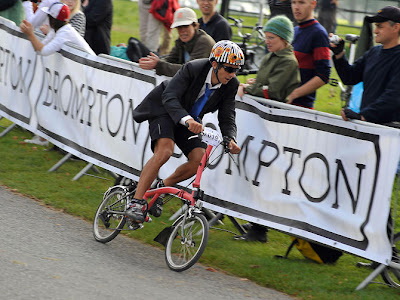 Who would have thought that three years later I'd be racing with an optimistic dream of adding the five coloured world champion bands to my commuting bike. And (glutton for punishment) I'm entered again this year!

The Blenheim Palace cycling festival has other attractions and 2008 turned out to be an expensive trip.  The Go Ride stand was a great opportunity for my children to demonstrate their bike handling abilities and to have a go on the many unusual bikes of various designs that had been brought along.

One such machine was a recumbent and my son had to be prised off the demo bike with the promise that Father Christmas would bring him one.  He did and a blue KMX Kart miraculously came down the chimney later that year and has been cherished since.

I have always admired the quirky designs of recumbents and a well thumbed Bicycle Design book by Mike Burrows sits on my bookshelf, so I have been a little jealous of my son and was frustrated at the weight limit for his bike.  So when he said he thought he was outgrowing his Kart I lept at the chance to buy one of the bigger models for the whole family to enjoy. 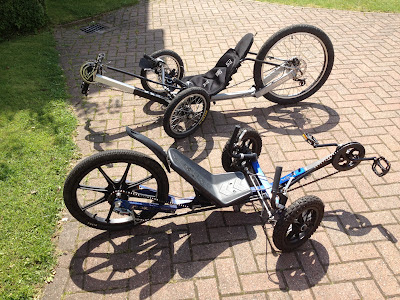 X=N+1, etc, but I think it is time to reduce N by one (down to 18) and my son's Kart is available to buy.  Please contact me if you are interested.