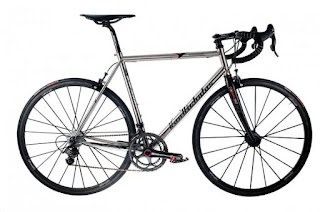 I have had my Chinook for 5 years.  I bought it using the Cyclescheme and specified it with the Ultegra 6603 groupset.  It has helped me complete l'Etape du Tour, the Marmotte, the Time Megeve Mont Blanc and many other sportives.
Last year bikeradar reviewed the Chinook and claimed it was the ideal sportive bike. I think they are absolutely correct as the frame has just the right amount of spring to make it responsive yet comfortable on longer rides.
I bought the bicycle with the intention of keeping it forever and, to-date, it has had some upgrades mostly courtesy of a civil claim against a driver who knocked me off it, but (now that lent is over) it is getting an overhaul.  Rather than sell the bicycle and replace it with a new one, I am upgrading the components to make it lighter, adding to the enjoyment of riding it and for it to get me to the finish line on the l'Ardechoise (hopefully) marathon.
I had already swapped the chainset to a Rotor 3D compact with Q rings earlier this year. I added the new carbon Ultegra pedals and the brake calipers were also swapped to the magnesium TRP970SL.  Then I deliberated on whether to go for the Di2 groupset, either the new Ultegra or the more expensive Dura-Ace.
In the end I couldn't justify paying almost £1,500 for the levers, derailleurs, cables and battery with charger for the Dura-Ace kit and decided to save the money and weight by going for the mechanical 7900 Dura-Ace.
I am in the process of building the bike up with the new groupset and will post pictures, weight and my feedback on the changes shortly.
What's next in terms of fettling and tweaks...perhaps replacement transfers from Van Nicholas as those on my bike are looking a little chipped and tired, maybe new titanium bolts for the stem and seatpost clamps and I also like the look of the new titanium jockey wheels from Van Nicholas although 75 Euros is a bit steep.
Posted by BMc at 20:19