I rode the Rapha Hell of the North on Easter Sunday...

An early start to catch the 7:58am train and (no surprise) FirstCapitalConnect are reporting delays, thankfully of only a few minutes.  I have ridden the Rapha ride twice before and have memorised the 4 mile route from West Hampstead Thameslink to the start at Pond Square.  Even so I know it will be cutting it fine to be there amongst the first to depart at 9am. All the more scalps to take :-)

I chose the Basso with my Winter wheels and the Vittoria open pavé tyres. Ideal for the wet roads and the tracks that I knew lie ahead.

The ride from West Hampstead station up through Hampstead and round the Heath was quiet with very little traffic and no sign of any other cyclists.  I was surprised at how many art galleries there are in Hampstead high street, certainly more than you'd expect given the amount of vacant shops in most other towns.  The high class florists in a marquee at the side of Spaniards road was equally surprising, especially being open at 09:30am on Easter Sunday.

On arriving in Pond square, Rapha had laid out some barriers adorned with Flandrian flags to arrange for the riders to queue past a signing-on table and then back on to the road to be flagged away in small groups.  There were only eight or so cyclists and myself readying for the off and I rushed through to join a small group already waiting to go and we were off down the A1000 almost immediately.

Our little peloton appeared to be made up of a mixed bunch; some club riders who looked a bit useful and several riders like myself wearing Rapha kit.  We were being led out at a reasonable pace by a cyclist on a Dawes Galaxy and I tucked in behind someone on a Condor fitted with mudguards.  At the first lengthy downhill section my handbuilt Winter wheels (and perhaps my extra weight) had me freewheeling past the peloton and I continued the pace dropping all but one.

This other rider struck up a conversation, initially remarking about my tyres and then we got talking about other sportives we had both ticked off.  We passed several other cyclists and got into a good pace, he being a little quicker on the climbs requiring me to push myself a bit more than I might have alone and me taking the lead on the descents and flats.

Sadly I punctured before we even got to the first off-road section and I told the other cyclist not to wait.  I replaced the inner tube pretty quickly but couldn't find the cause and I assumed it must have been a thorn which had since come out.  The front tyre flattened again within 100 feet and I found the offending cause; a shard of broken glass lodged in the centre of the tyre.  I managed to repair the puncture using one of my pre-glued Lezyne patches and re-joined the ride, riding solo and, probably now, carrying the lantern rouge.

I upped my pace and began to reel-in other riders.  The first sections of off-road were easy concreted farm tracks but those around Broxbourne were rutted bridleways and I adopted the 'rules of the road' technique suggested by Rapha - accelerate over the rough stuff, with hands on the tops.  It works and I flew past many other cyclists.

One section I knew descended to a river crossing and I warned a couple of riders as I passed them and tipped them off about the footbridge to the left.  As I got to the water I could see a photographer waiting to capture some action shots but I decided not to get my feet wet and sought out the bridge...to find the path blocked by a neatly stacked log pile.  Ambushed by the photographer I reluctantly rode through the water, filling my shoes and cursing - the cheeky ****. 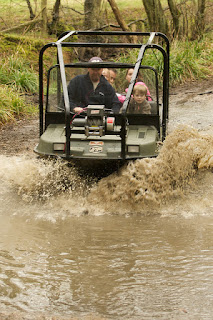 I caught a larger group of cyclist some wearing Twickenham CC jerseys and, as I picked them off on one off-road climb, my Basso received some compliments from a rider on a Van Nicholas.  I returned the compliment, saying I also owned a Van Nicholas and then dropped him and the rest of his group.

At the feed station I filled up my water bottle and grabbed a banana.  I jokingly asked how many riders were up ahead to be caught, to be told 'most of them' and then praised on my attitude.  Perhaps I was in with a chance of winning one of the prizes - the rider who exudes the most panache (one can hope), maybe the most punctures (with 2 - unlikely) or best bike (I wish).

I carried on more determined to get to the finish and get a good seat in the pub.  As I hit a section of steep off-road I recalled how in 2010 it was like riding up a narrow waterfall and last year how I began to feel tired on the verge of bonking at this point.  I changed down to the granny ring and reflected on how I was feeling - surprisingly good and then two other riders charged past me and I gave chase.

The two whippets were gone as soon as I rounded the next corner and I never saw them again - good speed chaps.

The route crossed the motorway by footbridge for the last 10 kilometers and I had a bit of a scare taking the right hand junction as the road was greasy, I think, from the lorries exiting the nearby aggregate quarry.  I noticed on the return leg over the same footbridge that sand had been put on the road and an Attention sign erected but I don't recall seeing it when my front wheel lost grip in a bottom-twitching moment.

Counting down the two remaining off road sections in the last 10 kilometers and disaster struck again - another front tyre puncture and glass again.  I replaced the inner tube quickly using my last spare tube and topped up the pressure with the CO2 canister.  Incredibly I'd got the tyre up to about 6 bar for the three repairs using just a single canister.

The final leg to the finish was (thankfully) uneventful although it began to rain.  Good timing.

The pub yard was again being used as a secure bicycle park and I left the Basso under the watchful eye of two Rapha employees.  In 2011 I had started the ride in an early group and there were less than 5 other bikes parked up when I arrived at the pub.  This year it was full.

The pub was heaving.  I grabbed a free bottle of Belgian beer, a free bag of chips, found an ok spot to watch the Paris-Roubaix coverage and said 'Op uw gezondheid' (cheers) to Rapha.

A few notes to myself: