It's all about the bike

I have watched the television production he made during the writing of the book and, whilst it is entertaining and informative, the factual references, history and anecdotes in the book make it a must read for any cyclist. 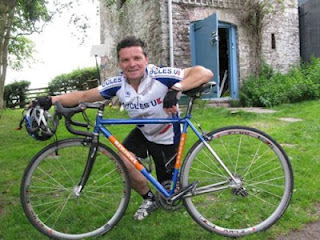 I have a huge respect for Rob's cycling achievements too - in the Drivetrain section of his book he tells the story of cycling up the Khunjerab Pass, one of the highest paved road passes in the World (4733m), cycling uphill on his loaded bike for 7 days!  I won't spoil what happens when he reaches the top of the Pass. You will have to read the book.

A bit of a tip for Rob though - if you are being filmed on the bike, as you were on the climb to the Madonna del Ghisallo, don't clear your nose the farmers way.
Posted by BMc at 19:32