I drove out to spectate at the Cat 4 & 3 race this morning to cheer on some of my friends.  An unplanned lie-in meant I arrived shortly after the start so decided to drive around the course to catch up with the peloton but there was a crash at the first corner with at least five injured cyclists sat on the grass verge, so I parked up to wait for the 2nd lap.

There was always a risk of a crash with ninety cyclists on narrow, greasy lanes and the pot holes added to the challenge. 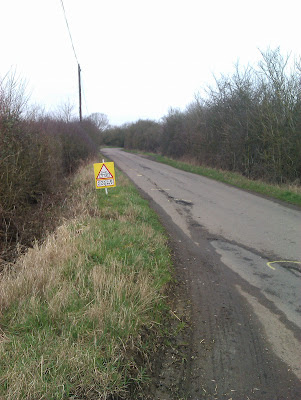 The road conditions were awful and there was even a dead badger lying in the road and other road-kill in the gutters. A crashed car lay on its roof at one road junction on the circuit.

So the conditions for racing weren't ideal.

I  got back in the car and followed the lead bunch for the remainder of the 2nd lap and they were averaging nearly 25 mph.  Not bad for a 75km race. I drove behind a support car for some of the lap with two dropped riders getting a tow to try to get back to the bunch.  Their speed was in excess of 40mph on a long downhill stretch.

On the 3rd lap one rider from Hemel was soloing away and he had a distance of 200 metres before a two man chasing group and then the main bunch were a further 100 metres behind.

I had to leave before the finish but the British Cycling report states that the Hemel rider narrowly missed the win.  One MK rider in the top 10 and my friend reported he came 11th. 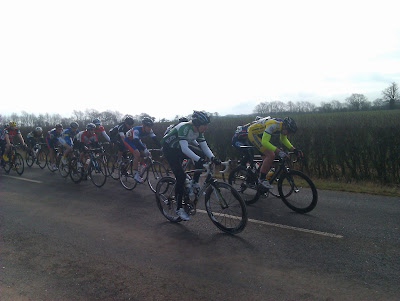 In the afternoon I had free tickets to watch MK Dons play Exeter.  The home team won 3-0!

So will the double dose of  'spectator training' boost my 100km pedal planned for tomorrow?  I hope so as the diet plan went awry during the week.

Three Brompton commutes and one lunchtime road pedal, so only 50 miles so far.
Posted by BMc at 17:52