No discipline - Five hail Mary's - I bought a bike 'upgrade' and broke my Lent promise, however I pressed buy-it-now on a Sunday so I'm unsure if I need absolution. 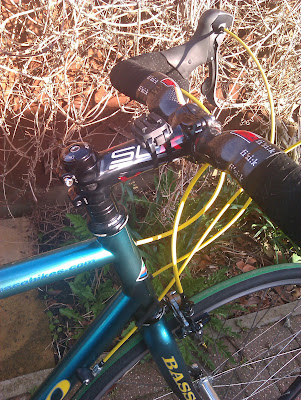 The saying goes 'measure twice, cut once' or in my case, 'measure twice and buy it once', and I paid it no heed as I bought the wrong length handlebar stem.

One of the build parts I didn't have in my spare box when I built up the Basso was the stem so I went ahead and bought a used FSA K-Force in my normal 130mm size.  But riding the bicycle hasn't been totally enjoyable especially on longer rides and I started having thoughts about selling it.

I swapped the deep section wheelset to my winter wheels which made some improvement but my back still ached on rides of any distance, so I took out my tape measure and spirit level again and checked the set up.

The saddle height was exactly the same as my other bikes, corresponding to the bike fit I had in 2008.  The knee to pedal alignment was spot-on, so the saddle fore-aft position was correct.

Then I checked the bar height, measuring from the front axle spindle to the underside of the handlebar where it meets the stem. I also checked the distance to the top of the brake lever hood.  These were also fine, so the seating position, the bar height and the lever position were consistent with my other road bikes.

Finally I checked the reach and found that the distance from the nose of saddle to the handlebar was 1cm longer than on my other bikes.  I measured and checked again and yes, the top tube length on the Basso is slightly longer than the Wilier and the Van Nicholas.

Nothing for it but to buy a shorter replacement stem.  I have to admit not liking the bulkiness of the carbon K-Force and, sticking with FSA, I preferred the design of the SLK, thus I decided to add a 120cm one to my post-Easter shopping list. I just thought I'd do a quick search on the Classifieds to compare the going prices versus new and, lo and behold, I spotted an irresistable bargain and immediately became a Catholic ;-)

I haven't had a chance to try out the change as I used the Van Nicholas for a short 25 mile Sunday pedal today to test the lungs after the self diagnosed Man Flu during the week.  A longer road test on the Basso will have to wait.