Another 100km+ ride today.  My 3rd for November, so my Metric Century Challenge is looking good.

A crisp, winter morning and I caught the train to West Hampstead to ride some different roads. I climbed up to Hampstead and rode around the Heath to get to Highgate. I followed the Great North Road through Finchley, Oakleigh Park, Barnet, Potters Bar, Brookmans Park, Welham Green, Hatfield and on to Welwyn Garden City. 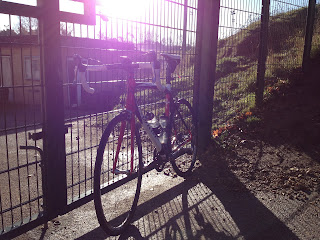 I had a quick stop in Welwyn Garden City to look at the outdoor cycle track at Gosling Stadium, the home of Welwyn Wheelers.

From WGC I rode through Lemsford village, past Brocket Hall and on to Wheathampstead. From there I climbed to Harpenden and then over to Redbourn. 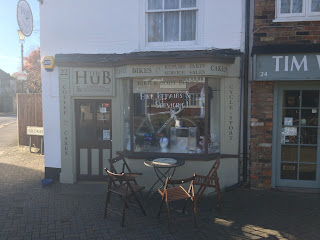 I wanted to visit the cyclists' cafe that a friend of mine had opened - 'The HUB'
I met Simon Barnes a few years back, when he was CEO of Plowman Craven and the company sponsored a pro cycle team.  My family and I cheered for the Plowman Craven team at the Halfords tour series and other races and Simon very kindly gave me the team kit and invited me to a corporate hospitality event at the Manchester Revolution series.  Sadly the team were disbanded during the recession after initially moving to Madison as the sponsor.
Now Simon runs his own small coffee shop which is clearly a mecca for local cyclists.  The coffee is superb and the latte with a double shot (that Simon recommended) is the ideal get-you-home cyclists drink.  The cake selection is fantastic and Simon mentioned that some of them are baked locally by a person who was on the Great British Bake Off television program. The lemon cake that I sampled was very, very nice :-)
Simon shared some of his big plans - he has a 'Christmas Cracker Ride' organised for 16th December, he is having evening Do's with pro riders and fun events with Tacx turbo training races. He has also had approval from the local council to schedule a closed road criterium race around Redbourn common.
www.hubcoffeebikes.com
I suspect I shall be exploring the lanes to find good routes to Simon's cafe in future.
Posted by BMc at 14:43