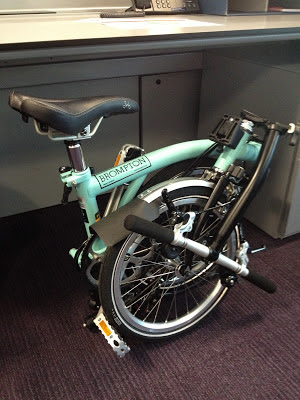 I swapped over my Brooks saddle from my old Brompton and applied some helicopter tape to the spots on the frame which tend to suffer from cable rub.
My 11 year old son gave the new bike a test run and gave it the thumbs up claiming the 6-speed is an improvement on my old 2-speed.  I'm still unsure, but we both agreed that the hub gear change is very stiff to operate.
A short test run around the road is clearly not going to provide a good assessment, so we decided to go out for a longer run, my son on the new bike and me riding my old S2L.  We rode our 7 mile hilly route and, by making effective use of the gearing on the new bike, my son got around the course without bother.  My legs were having a grumble though.
And still are - on Wednesday :-(
Mauled by a youth and a junior. I hope my legs recover for tomorrow night's race.﻿
Posted by BMc at 19:54