Last week I raced around the Mallory Park race circuit and the weather was perfect with a light breeze and temperatures in the high teens. The setting sun cast long shadows over the track and made for great photos (courtesy of my daughter)... 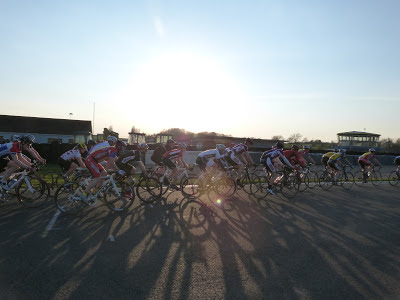 I learned a few more lessons from the Mallory Park race and it renewed my confidence in being able to complete longer, fast (26+mph average) races.  One of the positives I took away from the race was that my sprint wasn't half bad and, although I only finished 12th, I had jumped past a lot of the riders who had overtaken me in the melee coming out of the final bend.
My weekend training was the Spires and Squires Sportive, a 78 mile ride through the rolling lanes of Northamptonshire.  I was hoping to find a fast group to tag onto and get around the route in a very quick time. Sadly I ended up soloing around the route but gave it 'full beans'.  At the mid-way point my average speed was over 20mph but my legs started to grumble during the final 20 hilly miles after the feed station and I finished the ride in a little over 4 hours.
The high points of the sportive were seeing someone riding the 78 mile route on a Brompton and also spotting some ex-sports stars at the finish. I checked the results sheet afterwards and spotted Martin Johnson's name as completing the longer distance in a bit over 4.5 hours - not bad for a 6ft 7", 18+ stone rugby player, assuming he didn't do the shorter 50 miles and not advise the organisers ;-)
With my confidence restored and some training in the bank I decided to race at the MK Bowl again this week. The organisers were overwhelmed by entrants in the last race and made a decision to run an earlier 4th Cat only race this week before the main E,1 & 2 plus 3/4 race.
The weather couldn't have been more different from last week. Metoffice had forecasts blustery gales and rain so the deep section wheels from the weekend's sportive came off and I put the C24 wheelset on. We raced clockwise around the Bowl, my favourite direction but it meant that the block headwind would slow the bunch on the descent.
Forty minutes and five laps, twenty determined 4th Cat riders joined the start line.  I recognised several of the racers and overheard conversations of how many points some of them needed to move up to the 3rd Cat. Foul weather and a determined bunch - this was going to be interesting.
We set off at a comparatively easy pace, averaging about 22.5mph around the circuit and there were some early attacks with club mates soft pedalling at the front of the bunch to give their teammates a chance to get away.  Each time they got reeled in and I made the decision not to do any heroics. I sat in the bunch near the front and did a bit of work in covering attacks but I was happy to sit around third place even though I was getting a faceful of spray off the rooster tails of wheels in front. "Luke, Use the Force" sprung to mind at one point.
At five laps to go the speed lifted and I think a few riders got shelled. I chuckled as some of the riders discarded their bidons like pros in a tour stage. I had never seen that happen in a novice race before but it was an indication that these boys were determined to do anything to secure points.
Last lap and I was still sitting third at the bottom of the descent and as we rounded to the stage area... Bam! I had riders passing me on both sides and had the gloomy thought that I was going to be boxed in again. We hit the climb, I began winding it up for the sprint and from experience I knew some racers would blow and I hoped a space would open up.  On the drops and out of the saddle I sprinted up the outside, found a gap and dug deep.
Third place! Experience and lessons learnt applied giving me seven BC points.
My family and friends congratulated me at the finish and pointed out my face was black and my huge smile revealing teeth peppered with road dirt like a true Belgian sprinter.
﻿
Posted by BMc at 11:12