Summer weather is here and I forgot to apply the sun cream for todays' Chinook-O 2nd pedal.  My neck is slightly pink, as are my arms and a white-red line is visible on my thighs; evidence of an excellent pedal out in the sun.

The Wilier Izoard has been neglected recently so I decided to give it a run today rather than the Chinook and to see if it made any difference to my recent average speed.

I passed the Center Parcs building site on the way to the 8:30am meeting point at Marston Vale... 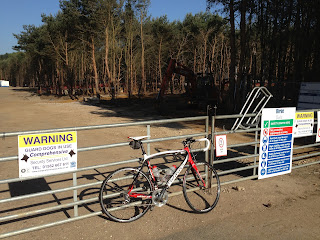 This is going to be the 5th Center Parc.
﻿
I announced the ride on a cycle forum but only Rick and myself turned up and we loosely followed a 45 mile route I had planned out to Cranfield, Aspley Guise, Woburn, Milton Bryant, Steppingley, Maulden, Haynes, Cardington, Cople and Willington.

﻿
We paused at the excellent Danish Camp again for tea and cake and then followed route 51 to Priory Marina Cycles to pick up some Wilier products I had ordered. 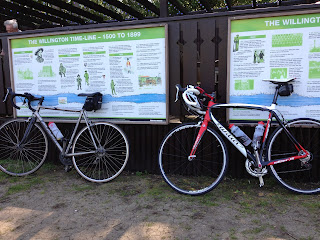 In total I rode about a metric century today with an average speed over 18.5mpg.  The route was a little bumpy with 2,500 feet of climbing and most of the ride was into a 10+mph Easterly headwind.

I think the Wilier gave me an advantage on the climbs but I put my increase in average speed down to riding with someone else.  Rick and I half wheeled each other, constantly raising the tempo and testing ourselves on climbs and technical descents - great fun.

Riding with others is a lot more enjoyable than long solo rides even if you put yourselves so far in the red zone that holding a conversation becomes a challenge.