Nocturne done. And I've returned from l'Ardechoise with Chris Hoy thighs (only mine are 24", not 27") so what should I target for the rest of the year? 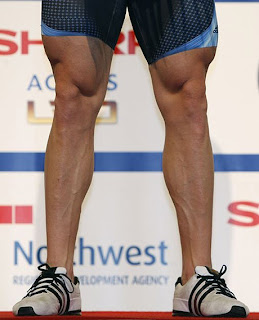 I am registered for the Brompton world championships again and I hope that the North Bucks' Brickhill Challenge sportive goes ahead in October, but I am also trying to help my son in realising his cycling target.  In September my son will be 11 years old and he wants to complete a 100km sportive so we are building on the mileage each weekend, increasing the average speed and looking for a good event.

I have found a nearby event and I have ridden others by the same organisers so I know it will be well organised, have good feed stations and a Sag wagon (should anything go wrong). The cost is £29.50 each which, let's face it, isn't cheap.

However, it is cheaper than the Etacktape Caledonia which is £61 and is a topical subject, in particular the inference that it is a charity related ride.

I'm not going to comment, however for those planning to do the Caledonia event in the future can I point out that l'Ardechoise entry is a lot cheaper, it isn't too much further to drive to than Scotland if you live in the South of England, the cost of diesel is cheaper in France, accomodation in France is cheaper, you get a bidon and a cycling jersey in your l'Ardechoise goodie bag and the weather will be better.  Just make sure you like brie and salami.