...basically I survived but only completed the 220km (137miles) Ardechoise route.  I made the decision at the turning for the longer Les Sucs and Velo Marathon route that I'd risk not finishing at all if I went for the extra 58km.

I have been trying to analyse what wrong and on the 690 mile drive home I knew that I made some fundamental mistakes but realised that, at 90kg, I'm not cut out for achieving medals on the very long and hilly sportives.

Firstly my refueling strategy was wrong. 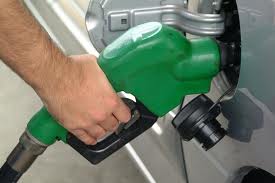 In training I tried all sorts of bars, powders and gels and found the SIS gels suited me and the PSP22 drink powder.  So I took 5 gels, had one 750ml bidon with PSP22 for the start and a sachet to replenish it mid-ride.

The gels were great because I didn't need to wash them down with gallons of water, although the empty packets stuffed back into my pocket were a bit sticky by the end of the ride.

The PSP22 refill was, retrospectively, very funny. At a feed stop, I had some liquid left in the bidon and poured the powder in, gave it a bit of a shake and passed it to one of the French villagers to top up with water. He emptied the contents onto the grass and then topped up the bidon with sparkling water. Groan.

For bars, I brought a couple of Natural nut bars and my wife made her fantastic flapjack. I took a bento bag with a plan to fill it with the flapjack. But I made the mistake of changing my plan after hearing that food would be provided in every village we passed through and so I left the bento and flapjack in the car :-( 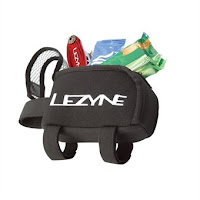 Sadly the feed stops didn't turn out to be ideal and when I made my first stop at the top of a long climb, over 2 hours into the ride, my heart dropped - I couldn't stomach brie and salami with thin slices of baguette.  They did have some banana but it had been chopped into small slices and looked pretty grim in the 27degree heat. I grabbed a mouthful of dried apricots and some packets of what I hoped was a fruit loaf and stashed them in my jersey pockets.

The 220km route traversed 10 valleys and the descents were quite technical; swoopy and not particularly steep and the road surface wasn't super smooth, so I didn't go much faster than 40mph but couldn't eat or drink for fear of losing concentration.  When the road levelled or began to climb, then I drank and ate and the packets I grabbed ended up being sponge cake which cemented in my mouth and I felt like a hamster.

The scenery around the Ardeche region is beautiful.  The volcanic domes rise up above the mountains and the Loire river rushes through the gorges in and out of the valleys.  In the valleys there was a rich smell of pine trees but at the top of the climbs the wind howled at speeds of 50km per hour.

The Van Nicholas and the compact Q-rings were perfect. I used my lightweight C24 Dura Ace wheelset which was suggested by my son and he was bang-on.  They were a better choice than the C50 wheels in the wind and for climbing. The titanium Chinook and my Fizik Arione Versus remained comfortable throughout my 12 hour ordeal.

My training and planning for l'Ardechoise was on the assumption that the ascents were about 4%.  When I was fuelled I was able to keep my cadence over 80rpm on climbs under a 4% gradient but any steeper and it became a grind and I watched my average speed progressively drop throughout the ride.

At the 78 mile marker I exploded.  I had zero energy left, a puncture had left me feeling disheartened, I'd seen the Garmin reporting uphill gradients of 9% and at this low point I took the 220km route.

The ride didn't improve for me for the remaining 58miles.  I refused a bowl of what I thought was stewed apple at one feed stop to be later told it was potatoes in gravy, which would have been fantastic.  I was so tired and I almost fell asleep on one downhill section. Other riders were beginning to collapse in the later stages and I saw some being wrapped in space foil and helped into ambulances.  On a descent close to the finish I was flagged down by a policeman and told to proceed slowly around the next corner where a rider had over-cooked the apex, injured himself and he was receiving medical attention from an ambulance crew.

As I neared the start-finish village I had read that the road reared up to 15% for 300 metres for a final crippling climb but it didn't materialise.  The route must have been changed from previous years and the last miles dropped down to St Felicien on the road we started on at 7:30am.

In conclusion I had a great holiday but it was too short, I am disappointed at not completing the full Velo Marathon but the 220km is still a great achievement.  I've learnt a lesson regarding sustenance, adding powder to water after refills, not to change plans and not to book cheap hotels near autoroutes which have people coming and going at all hours and which don't serve breakfast before 6:30am. 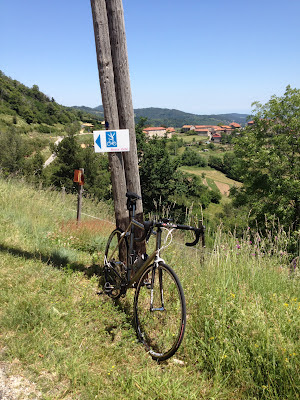 Above - my pride and joy on the first climb above St Felicien. 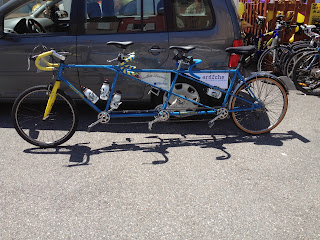 Spotted in St Felicien on the Friday registration - why not share the pain? 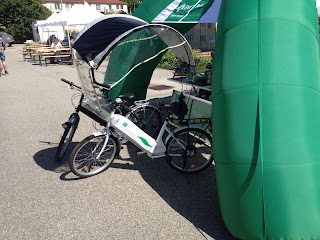 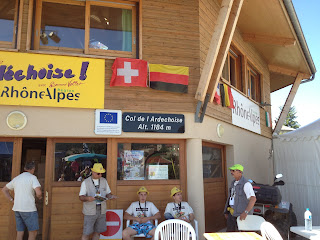 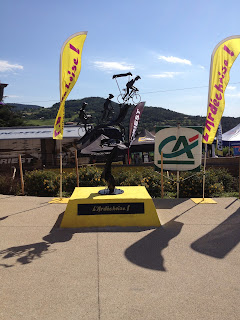 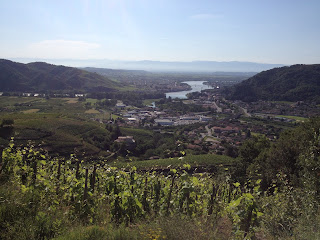 Superb views across the Ardeche 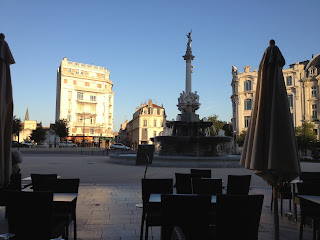 The town of Valence where I stayed for 3 nights 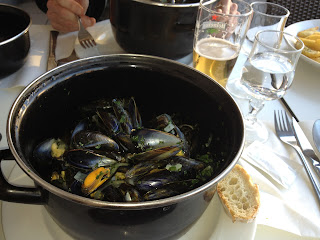 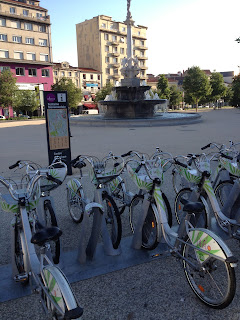 The Valence equivalent of Boris/Barclays bikes 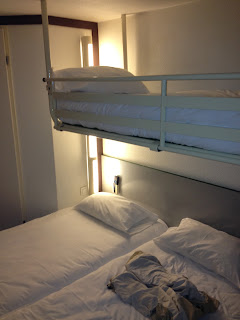 My clean and cheap room in the noisy Premier Classe hotel in Sud Valence
Posted by BMc at 14:43