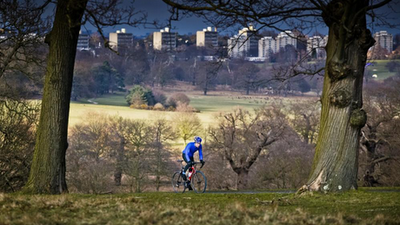 The winners and runners up of the Barclays' bike photograph competition have been announced.  The winning photo above and the runners up are superb and no sign of a Boris bike in the pictures so my prediction was wrong.

Books:
One author who had a crystal ball was Ray Bradbury.  I read his obituary this morning and recalled the comics and books I read in my youth, either written by him or clearly inspired by him.  I hadn't realised that he was passionate about cycling and described his own life as 'drunk and in charge of a bicycle'. 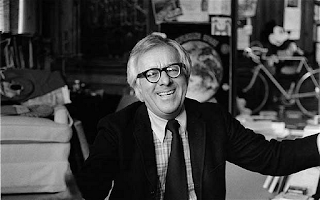 I also found another article where he said the following:-

It’s obvious the automobile is not solving the problem and the freeway is not solving the problem. So, I make the bigger leap of saying we need to provide other means of transportation, which means the monorail that is above traffic. And until we do that, people are going to be increasingly angered by the limitations of the automobile and its inability to function. I’ve read of the idea of monorails north and south over Los Angeles, for instance, and monorails running east and west so that people have an alternative to the bus system.”
We’re talking about eliminating cars here. Cars don’t work in the city. You’ve got to eliminate the cars. It’s the car and the city environment that doesn’t work. It doesn’t matter whether you have hydrogen cars or not. There has got to be other means of transportation.

I recently finished reading the last of the bicycle-related books I received on my birthday and I think I'll go on a journey of reading and re-reading Ray Bradbury's work.