Racing is life... everything before and after is just training

4th Cat race, 1 hour plus 5 laps of the 0.7 mile circuit and, at sign on, I looked down the list of names and date of births and thought 'Crikey, I'm old enough to be their dad'. Hopefully these boys were playing with their Action Man toys over Christmas whilst I was out putting in the training. 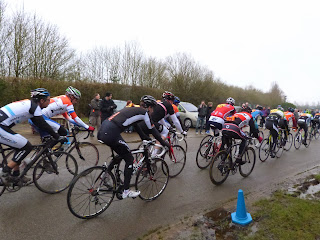 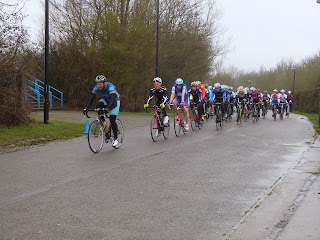 After warming up I joined the forty or so other 4th Cats on the line, strained to hear the Commissaire give her speach and then we were off - fast and close.
On my warm up I had made a mental note to avoid the standing water on the side of the climb and yet first lap of the race I found myself on the outside riding straight through it, getting a faceful from the wheel in front.  Whilst the pace was fast I felt that I could go quicker, yet when I did my turn on the front I realised it was a lot harder to maintain the speed. I drifted back into the peloton and then found myself sat at the back so I worked my way back up closer to the front on the climb each time around.
Whilst drifting to the back I saw three riders go away and realised that they were going to make it stick, especially since no one was making an effort to chase them down.
The next lesson I hope was learned by two other novice riders; one who jumped across the peloton nearly bringing down several riders, and another who veered off his line and had the cheek to criticise me when his handlebar clashed with mine. Thankfully no one crashed, even though the road was slippery in places.
With three up the road the race was going to be a sprint for fourth place. On the hour, with five laps to go the pace lifted and I found I had to maintain the pedalling on the descent to keep up. I managed to find some space on the climb and approaching four laps to go I decided to attack. I raced past the head of the peloton, hands on the drops and pushed myself to try to get some distance. Sadly it only lasted half a lap and I was caught before hitting the climb again. I sat in the bunch and rested my legs in preparation for any other attacks or the sprint.
With a lap to go we started to catch some riders and I realised that they must have gone out the back when the pace lifted and they were being lapped. Thankfully I was still feeling pretty good.
As we hit the climb I found myself boxed in, but I flicked it down a few sprockets and started the wind up for the sprint. I could see several riders beside me blow and I managed to get round the rider in front and out sprint them across the line.
One...two...three...six riders ahead of me, plus three up the road. Yes, 10th place and 1 point! No disgrace.
﻿
Posted by BMc at 21:13