Today was the day.  My son and I rode the Marlow Red Kite sportive; 50 miles, nearly 900 metres of climbing and we averaged 11.5mph.  Pretty awesome for an 11 year old. 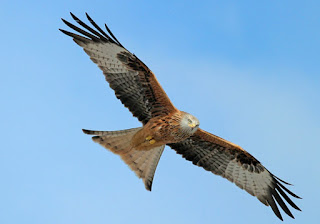 The route took in some spectacular views and generally used quiet lanes, some of which reared up and I saw 13% on my Garmin on one long climb.  At one stage my son looked at the road ahead and saw an impending climb which he described as a 'wall' :-)

He went through the typical periods of pain I have also suffered with, first his back, then his bum, then his knees and finally his neck. He made me chuckle at one point; claiming his bum had gone numb and that he couldn't feel his legs but that they were still 'turning like a tuned engine'.

The last few miles of the ride dragged on a bit but he still left some energy in the tank to outsprint me to the finishing timing mat and get a better time than me.

We received plenty of praise at the finish.  The organisers congratulated my son and other riders said he looked great on his bike.  We had a quick drink, bought a raffle ticket and were about to leave when one of the organisers spotted my son's rider number on his bike. It was one of the randomly selected numbers and he had won a British Cycling jersey covered with 9 autographs of our top velodrome riders, including Sir Chris Hoy. Fantastic! 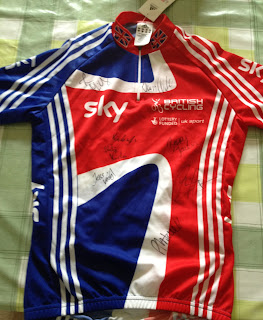 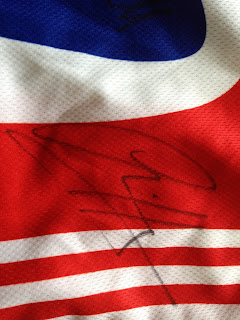