I find that cycling cures my hay fever -well, it delays the symptoms until the pedal ends and the adrenaline wears off.

My hay fever has occurred later this year, probably due to the jet stream position and related climate change and I've recently been suffering with sneezing fits, a nose that turns into a tap, itchy eyes and an itchy roof of my mouth. All the more reason to get out on the bike and continue cycling as much as possible, but this year I have had a new symptom.

At the Smithfield Nocturne I experienced a pain in my throat as though I had swallowed a big fly and I couldn't stop coughing.  I have had recurrences and suprisingly only when cycling.  So far it happens in London on my commute and I guess it might be due to the pollution but I don't remember experiencing similar before this summer.

I suppose one solution is to get a Bane mask, which might also help scare people out of my way on the commute. Now there's an idea... 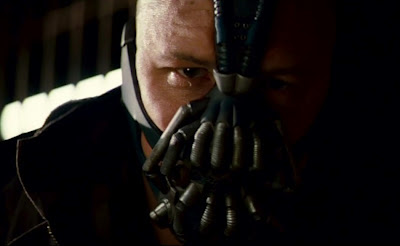 Another option is to stay out of London and work from home during the Olympics. Like!
Posted by BMc at 19:46