Early in my morning commute today I entered the 'creative thought' zone; the alpha zone.  I tend to get my best ideas whilst cycling (and cross country running and, bizarrely, when I wash the car) and this morning I was being dazzled by the sun, low in the East in the direction of Canary Wharf and I thought about the dogfight techniques of fighter planes. I remembered one of my granddad's favourite stories about 'This is your life', the television program presented by Eamon Andrews.

In one live show, Eamon Andrews was giving the red book to a famous fighter pilot, Joe Walensky, and he asked him to regale a tale of shooting down enemy planes during the 2nd world war.  Mr Walensky gave a great description of an airborne battle where he defeated two Fokkers who came out of the sun.  Eamon Andrews clarified for the benefit of the viewers that Mr Walensky was referring to the German airplane the Fokker-Wulf, to which the chirpy ace responded, “NO THEY WEREN’T! THESE TWO FOKKER’S WERE MESSERSSCHMITTS!!" 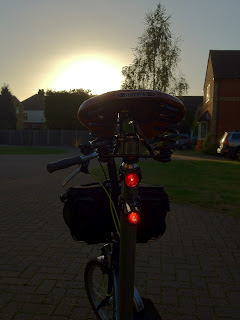 My next thought was my own safety in the dazzling sunlight and to reduce the risk of a SMIDSY (Sorry Mate I Didn't See You) I reached behind and switched my new Lezyne lights on.

My son and I also used the lights during the Red Kite sportive.  There were a few lanes which passed through wooded areas and the lights must have been good as we received several compliments and questions on the make and models from other riders.
Posted by BMc at 20:19