With only 22 mile commuting miles and one turbo trainer session this week, I needed to get out on a bike.  The mercury didn't get above -1 yesterday and reports of -10 overnight worried me about the condition of the roads so mountain biking was the obvious option. 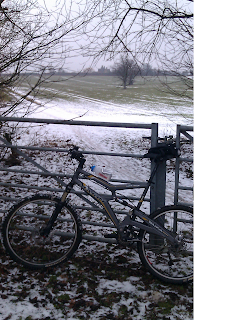 I pumped the tyres up on my Marin Wolf Ridge (bought new in 2002) and took to the local bridleways accompanied by my 10 year old son riding his Trek Liquid 10.

Despite some of the local woods being developed for the forthcoming Center Parc there are still lots of excellent trails near my home. We did a short circular route choosing to return home earlier than planned when I lost the feeling in my fingers - retrospectively the Assos early winter gloves were an unwise choice for the temperature.

Mountain biking was my passion for many years, mostly cross country (and a taster of downhill in Courcheval in 2005) but in 2007 my interest in road biking was rekindled when I rode the 187km London to Canterbury stage of the Tour de France.

As well as the Marin, I have also got a 2002 Airborne Lucky Strike  titanium-frame hardtail which has undergone a few upgrades and with a few further planned.  If this cold weather continues then I think both of my mountain bikes are likely to see more use.
Posted by BMc at 13:32