Only 50 miles today taking my total for the week to 72 miles with the reduced 2 days commute on the Brompton.

My route today was over Pulloxhill to Barton le Clay and then Hexton climbing the long hill which hits 10%. Then through Lilley and to Whitwell.  I paused briefly in Whitwell to take a photograph of the water cress farm... 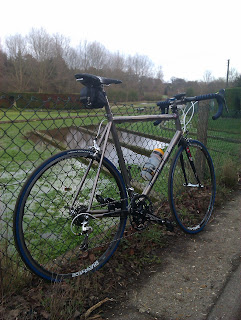 I rode my Van Nicholas Chinook today to try out the newly fitted Rotor 3D crankset with compact Q-rings.

Whitwell is a beautiful village and has a great cyclists tea stop but I didn't stop there today and continued following the path of the river Mimram on to Codicote and Old Welwyn.  I passed many cyclists on the way including someone on a recumbent and old Harry from Verulum cycling club.  I have ridden with Harry a few times and he tells great stories, like when he was younger he rode the Paris-Roubaix sportive and gave it full beans because someone told him that if you finished fast enough then you might get to share the famous Roubaix velodrome showers with the women cyclists who had a shorter route.

In Welwyn, I passed my old junior school at the top of the hill and continued towards the Ayots, passing George Bernard Shaw's house and on to Wheathampstead.  From there I went up to Blackmore and across to Kimpton over the short climb to descend back to Whitwell.  I followed my same route back to Lilley but instead of going over Hexton hill again I turned left to the top of the Barton cutting and descended the Sharpenhoe road next to the Clappers. From there I climbed up to Harlington (13%) and then home.

Average speed was a low 16mph, but it was a hilly circuit and did I mention it was Windy!
Posted by BMc at 17:35