I was given my first road race bike when I was 7 years old.  It was my uncle's bike but he wasn't interested in it and so my grandparents gave it to me.  It was a gold coloured R.J.Quinn bought new from the Quinn cycle shop in Liverpool.  I rode that bicycle everywhere, initially only by sitting on the top tube as it was far too big for me and I couldn't touch the floor when perched on the black Brooks saddle.  I wish I still owned it.

At 15 I bought a new road bike with my own savings.  It was a Raleigh bought from Halfords for £98.  With renewed interest in cycling I joined the local CTC and headed off on Sunday club runs exploring the lanes of Hertfordshire.

My CTC friends had some beautiful bicycles and it wasn't long before I wanted something as good.  On my 18th birthday my parents bought me a new 25" Holdsworth Special frameset. I worked that summer at Lone Star toys and used the money to build up the bike.

I have had my Holdsworth now for nearly 30 years and still ride it regularly. 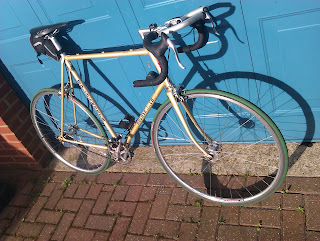