I have started to give my Basso some TLC. It has been neglected for some while and I shall probably use it throughout the Winter which appears to be approaching rather suddenly.

The Basso had been cannibalised for parts during the Summer; 1" steerer spacers for my son's bike and the saddle for Brompton racing. Whilst re-assembling it I noticed the rear brake calliper had seized, the rear freehub was in a nasty state and there was an obvious cause of the puncture to the front wheel... 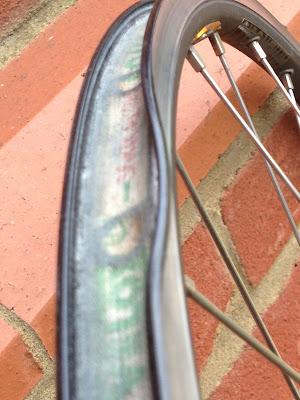 ﻿
The rim is so worn the tyre pressure has made it give way and, what with a kaput rear freehub, I have to admit the wheelset is dead.

They were handbuilt for me by John Poyzer in 2007 and have served me well. I have ridden the cobbles of Flanders on these and up many tour climbs and they have covered thousands of miles. RIP.

What should I replace them with?
Posted by BMc at 17:46