On our recent cycle to the Bike Bus, my son and I learned of the Fete du Velo plans in Redbourn village and, in particular, the planned road race organised by Simon Barnes of The Hub café. It was scheduled for Sunday afternoon and since we didn't have anything planned we thought we'd pop along to spectate. 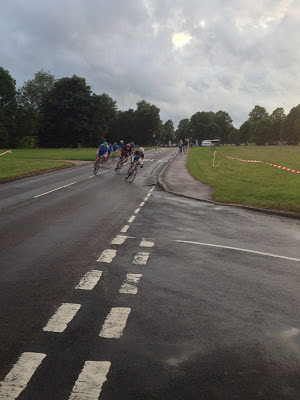 The closed road race circuit went around Redbourn Common with great spectator vantage points. Whilst waiting for the race to commence, we were watching from a tricky corner and Simon drove passed and asked if we wouldn't mind acting as marshals and to keep an eye out for any cars ignoring the 'road closed' signs.
Now 'officials' we stood at the junction and watched the racing and I regretted not entering myself; only twenty had signed up because of the wet weather but the mixed category race was great. The weather dried up mid-race and I think there was only one retirement. Simon had arranged for several Primes throughout the race and even the last placed finisher took home a couple of steaks courtesy of a prize donation from the local butcher.
The race resulted in a group of ten making a break splintering the bunch and after about an hour they had lapped a few riders who managed to tag back on giving the judges a bit of difficulty.
I'd like to think that I could have hung on to the break and finished in the points, assuming I hadn't ridden 100 miles the previous day.
﻿
Posted by BMc at 13:48