Saturday, 6:30am and I'm up preparing for today's cycle sportive: two 800ml bidons (one filled with water only, one with SIS PSP22 added), 1 gel, a pump, CO2 and a spare cannister, Garmin 705, prescription Oakleys, helmet, shoes, ID, telephone, money and my Mopha tool roll with inner tubes, tyre levers, patches and a tool kit).

Oh, and lights as it is still dark!

I was out on the road just after 7am to ride the 16 miles to the start of the cycle sportive. I had put 120PSI into the tyres because the weather forecast was good although there was still a lot of standing water on the roads.

As I left Flitwick and the street lights behind, I realised how dark it still was and I could see a few black objects on the road ahead. I presumed road kill, rabbits or hedgehogs, however as I got closer the objects became illuminated by my headlamp and I could see it was rats and not dead ones. Unlike squirrels they didn't immediately bound off the road and it wasn't until I was almost upon them that they scurried back to the verge and the ditch beyond, some passing under me between my front and rear wheels.  The joys of living in the countryside.

The rest of my ride to the start was uneventful and I paced myself at an average of 15.5mph, saving my legs for the 100km sportive and the pedal home afterwards.  I picked up my friend Jeff on route and we rode to the start together.

After registration we lined up ahead of the timing point. The organisers were letting groups of about 12 riders go every 3 minutes or so. Whilst waiting we were given a few instructions and, I am convinced, a warning about being careful on the Steppingley road crossroads.

Once waved off I waited to see whether there were any fast riders in our group who might set a good initial pace. No one made their way to the front so I upped the speed and Jeff and I rode off the front and began to wind in some of the earlier starters.  My legs were feeling pretty good and I optimistically thought I could do the 100km at an average speed of 20mph.

We hit the first climb at the Three Locks and continued up through Great Brickhill and on to Woburn.  My average speed at the top of the deer park climb was still over 20mph and I was looking forward to the fast descent and upping the speed all the way to Steppingley. I could see a few other cyclists ahead and I put my head down and targeted catching and passing them, but on the road to Eversholt they sat up and were clearly debating whether they had missed a route sign.  I carried on positive we were going all the way to Steppingley.

At the Steppingley road junction I could see signs for the opposite direction and then I realised that the warning at the start must have been for those riding the 100 mile route. I was off course and should have turned left much earlier towards Ridgemont.  Rather than doubling back I rode past the Center Parc site and up to the A507 to get back to Ridgemont. I must have added another 7 miles or so onto the ride.

I continued riding at a reasonable speed, passing some riders for the second time, but I knew my time was going to be skewed by the added miles. I began to ease up as I approached 15 miles or so to go, my legs were beginning to cramp and I knew I still had to cycle home.

At the finish, Jeff and others I had initially led out were already there and summised I may have missed the turning after the Woburn deer park. My Garmin indicated my average speed was over 18mph and I had ridden 69miles. My finish time was 3hrs 54min (an hour behind the fastest finisher).

The ride home was slow at an average of 15.1mph, my legs feeling stiff with the 100 miles in them.

My Wilier after the ride, desperate for a clean: 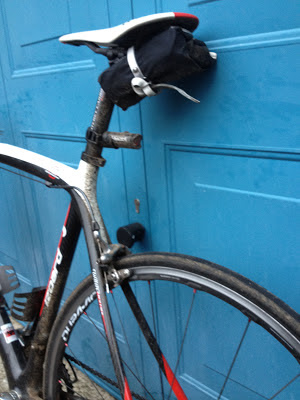