The family holiday this year was in Ceret, a small town in the Languedoc Rousillon region of France. The town is surrounded by Cols and close to the border with Spain, so, as you probably gathered by my previous post, my son and I took our bikes.

My (soon to be 11 years old) son has now started his own list of mountains he has ticked off with the Col de Llauro and Coll de Boussells.  Both were tough climbs and great achievements, especially given the 30+ degrees centigrade temperatures.  The Boussells climb took him a few attempts and it reminded me of the story of the great Gino Bartoli who, in his youth, would ride home from school on his fixed wheel bike and attempt to climb the 18% hill at Moccoli, each time getting a few metres higher before having to stop and walk.

The ride to Boussells follows a marked out route with AR painted on the road for a 20km Sportive Event. We followed the AR-se (chuckle) signs and on the first attempt my son couldn't conquer the 8% section so we turned back and completed the shorter, 6km AR-se route (twice!).

As we descended we passed another cyclist on his way up.  The rider was on an old bike, was wearing a big floppy hat and he was maintaining a good pace, looking 'useful', like a Grimpeur; a climber.  My son and I wondered whether we had just seen the reclusive Robert Millar out stretching his legs.


During our two week holiday there was a huge forest fire nearby which created a fabulous sunset... 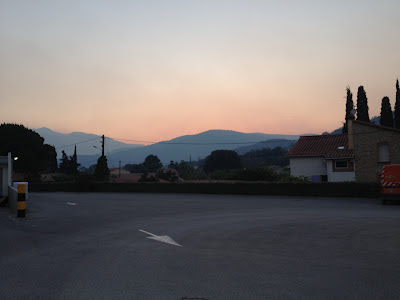