The holiday in Ceret gave me the opportunity to go for a pedal almost every day.  I found some great routes but the distances were short'ish as the temperature was hot and I carried only two bidons. Hydrate or die! Unlike the Alps, the Pyrenean villages and towns don't have fountains or troughs of potable water, so my ride times were restricted to about two hours.

When in the mountains find a climb - the tougher the better.

Our holiday villa was at the foot of the climb to Col de Brousse and I'd read beforehand that it was a 10km climb, averaging 7% with a maximum of 8.5% to a summit of 860metres; a cheeky Category 2 climb then.  I found out the hardway that someone's pants were on fire. Liars!

From the villa, my route started on a gentle ascent through a new housing development, following the AR sportive event road markings into the town where it passes the Gendarmerie and then the climb begins at a comfortable 6% through more residential streets.

At this point I was still on the big chainring, sometimes riding out of the saddle to get around the blind sweeping corners quickly.  The road narrows to a tight two car width but there are still houses, becoming grander, and so there was an occasional car. I flicked down to the small chainring when I saw 8% reported on my Garmin and passed the turning for the Coll de Boussells, AR-se marked route.

The road narrows further at this point, no more houses and you begin to get great views to the right. The gradient settles into a 6% to 7% lulling you into a comfortable rythm and I kept my cadence around 80rpm, congratulating myself on my choice of bringing the Van Nicholas Chinook with C50 wheels and 12-25 cassette.

After a couple of lacets (hairpin bends) the climb starts to rear up again. The Garmin was showing 9% (surely not, as the climb is reported as having an 8.5% maximum), then increased to 10% and my heart rate joining it exponentially.  The road is exposed at this point, rock face to the left and a sheer drop to the right.  I could hear the rumble of my carbon wheels echoing on the cliff to my left.

The 10% section feels as though it lasts for miles and my legs began to tingle with the exertion so it is was a relief when the road eases off to a more level section of 2% where I was able to spin the lactic acid out. Up until this point the road follows the mountain counter-clockwise, so there is little shade and it was bloody hot.  My mouth was parched; constant sips from the bidon providing short relief in the heat and my heavy breathing. I sounded like a train.

The climb then enters the trees, giving shade, but the gradient begins to rise up again.  In the first section of trees I could hear bells, similar to Alpine cow bells but less of a dong and more of a ding and the road became littered with dung... 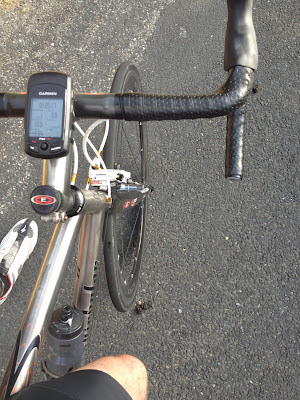 ...Goats. A small herd with the farmer sharing his semi-detached home with them. 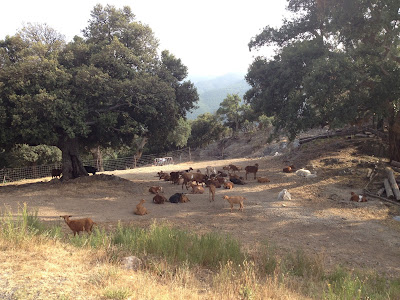 After the farm I regretted not bringing my climbing C24 wheels with a 28-tooth sprocket. The road kicks up to 13% and settles at over 10% for a big segment. It was at this point that a huge bird of prey swooped out of the trees, it's feathers were a dark chestnut colour and the wing tips were splayed (a Golden Eagle?). It banked left disappearing between the trees and down the mountainside and lifted my spirits. Spirits lifted but with heavy legs, I toiled on with the chain firmly on the 25 sprocket and the Garmin indicating a 10% gradient and confirming I had been climbing for nearly 7 miles.

At this point the road surface changes.  The tarmac so far had been rough and uneven and I had made a mental note to be cautious on the descent, but now the road had recently been re-surfaced and it was covered in a fine, sharp, white gravel - deadly at speed, especially on corners.  I spent the next mile or so crunching up the 9% to 10% narrow road, whereupon I was ambushed.

The road surface improved but I was greeted by a swarm of flies. Thankfully the summit was just around the corner and I quickly took a photo and jumped back onto the bike to come back down desparate to evade the flies. 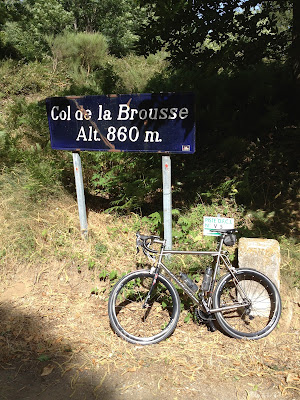 I rode the 8 miles to the top on several occasions. The first time at an average of 8.4mph and my best time with an average of 8.9mph.  On Strava, the KOM has an average speed of under 8mph so I thought I'd smash up it at the end of the holiday but had two problems; I got food poisoning from some bad mussels and, although I had recovered, on my final attempt I only managed 8.6mph average and then found my smartphone couldn't get GPS.

Another mountain ticked off.  I don't think it has ever been a tour climb but it is a ball-buster and I highly recommend it. Just don't believe the description.