According to a recent newspaper article a significant amount of online shopping goes on when people get drunk. I don't recall clicking buy-it-now whilst imbibing too many glasses of red wine, however I admit that the majority of my spending occurs whilst working from home (during my lunch break of course).

My Brompton has been the recipient of a work from home spending spree. I needed a new rear mudguard as the original had begun to crack and obstructed dropping the seatpost. I figured that this was due to too much weight being placed on the mudguard when the bike has been folded. I don't recall when it happened but it was evident because the mount for the mudguard stay had also started to rub on the tyre. 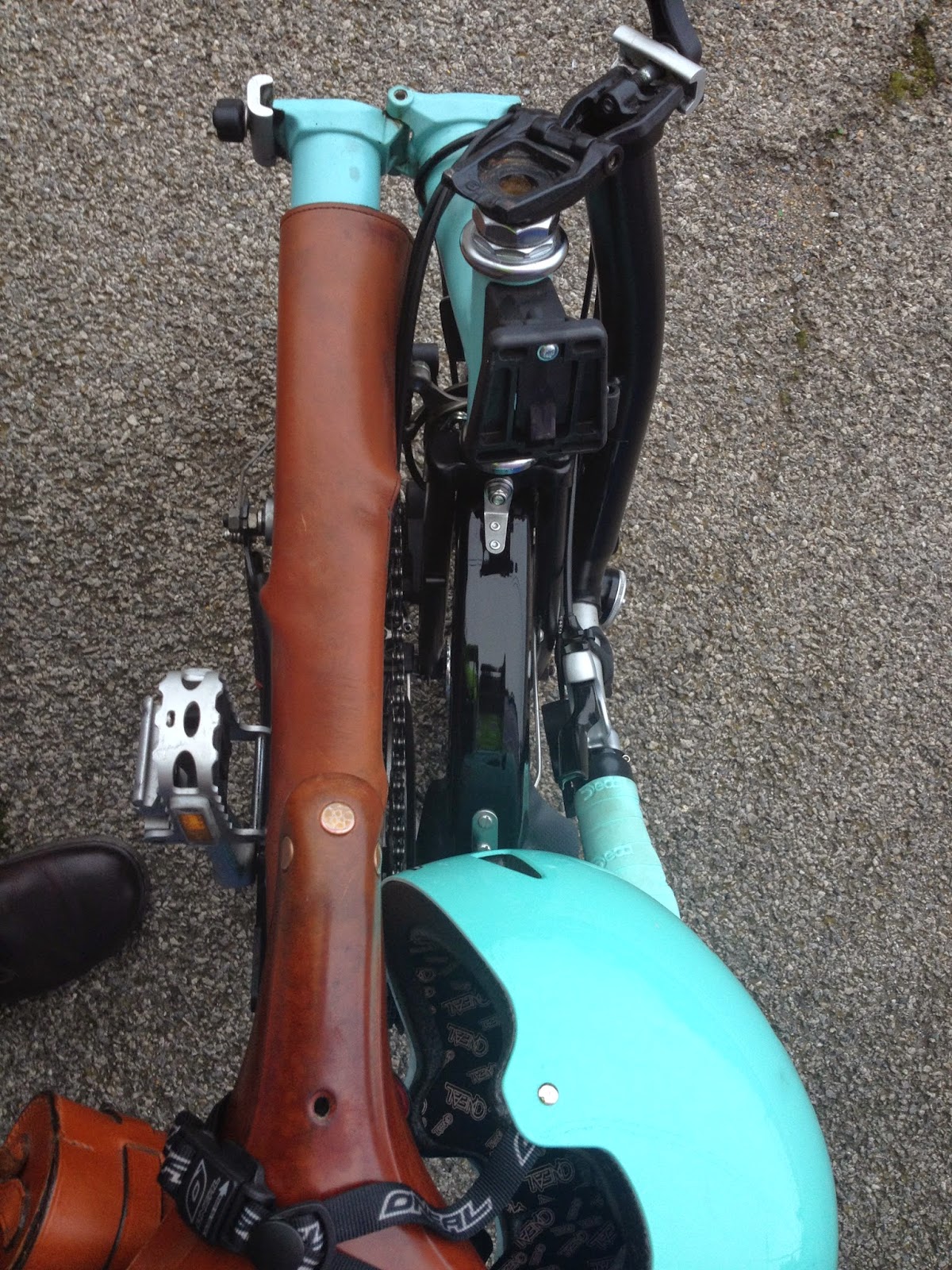 I replaced both the front and rear mudguard blades with the new black versions which I think match the Turkish Green-Black frame colours better than the original silver ones.

The rear wheel had been causing me issues so I also decided to replace it with a new one. The issues being that for the last 6 months or so I had been trying to resolve bearing problems with the BWR hub. I routinely grease the bearing hubs but had omitted to also do the freehub bearings and I started to feel drag on the freewheel when coasting. I replaced all of the bearings in the hub but it never felt as good as new, so I tolerated it for a while and then stripped the hub again, replaced the bearings (again) and unfortunately over-greased the internals with the result of clogging up the gear selection. I tried repeatedly to resolve it and whilst searching the internet for advice I spotted an advertisement for a new wheel built with the Sturmey Archer 5-speed hub, offering 10 gears. This got me thinking whether to buy a new wheel and justify it as an upgrade. I continued my searching and found a retail outlet selling the standard BWR wheel at a reduced price which put me in a dilema - fix/replace/replace with something different? I flipped a coin and went with the new BWR wheel keeping it as a 6-speed.

The new parts arrived swiftly and I installed them quickly whilst giving the bike a thorough clean. Riding a clean bike with new bits all working perfectly gives me a morale boost and the following day I tootled into work down the CS3 with a smile on my face... until I got rear-ended!

I had stopped behind two other cyclists waiting at a road junction on the CS3 and first I heard the apology and then the crash-bump as a cyclist hit me from behind. The other cyclist claimed he wasn't concentrating and was taking a drink so he hadn't seen that everyone in front of him had come to a stop. I couldn't see his bidon or any drink so I suspected he was riding no-handed but I couldn't see any damage to my bike and I felt ok so I (politely) told the other cyclist to watch where he was going in future and I continued my ride to work.

At work I realised that the cyclist's handlebars must have collided with my coccyx as I was finding it uncomfortable and painful to sit upright on my office chair and now, several (working from home and online shopping therapy) days later it is only just beginning to feel better. Retrospectively I should have taken the other cyclist's details so that if I needed physio therapy or had to repair my Brompton I could have made a claim for compensation.