I have been in a dilema for a while.

My S2L Brompton is over 2 years old and has covered approximately 5,000 commuter miles and about 25 race miles with little fettling required and certainly no upgrades. I have been considering whether to embark on some changes or buy a new bike.

Possible upgrades (with a focus on improving the bike for racing - clearly the priority):
I suspect all of the above might cost me nearly £1,000 before I even start to look at a Chris King headset, Velocity wheel rims and any Brompfication goodies.

Alternatively a new bike (with a more practical consideration for my ongoing commute and a little bit of racing)...

Brompton's marketing department started teasing would be buyers with pictures of their planned 2013 upgrades as early as August this year.  The brake lever and chainset got a complete makeover and I began to think about a new bike, possibly a 6 speed, maybe titanium and a change of colour.  Brompton had increased the price of the 2013 bicycles by about £55 and a casual look at a bike with the specification I dreamt about revealed a price tag approaching £1,500. Ouch - that would take nearly 2 years to be cost effective over the price of using public transport for my part commute.

Then my firm's annual cycle scheme came around and the provider confirmed they could offer me a Brompton :-)  It was a no-brainer, I could choose a bespoke 2013 Brompton providing it was under the £1,111.11 price limit.

I have gone ahead and ordered a bespoke S6L at a cost of £970.  The cycle scheme operates so that I make 12 monthly repayments out of my gross salary and my firm have confirmed they will gift the bike to me at the end of the year (sometimes there is a final payment).  I will end up making a saving of about £460 when you consider the tax.

And the colour...I've chosen Black extremeties with Turkish Green (which looks very much like Bianchi celeste). 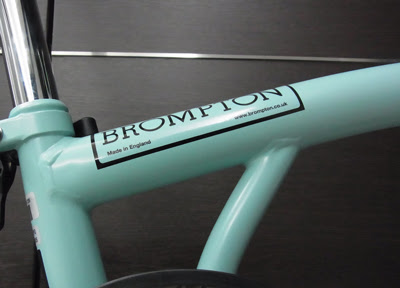